skip to main | skip to sidebar

I decided not to move the blog after all. It attracted malware over on the main site and I had to clean it all up, very tiresome. So here it stays.
Plenty of older posts below right - click on the years, months etc and they will all open up.
Posted by Steve at 7:31 AM 12 comments:

...as promised, some shots of the Selmer T&B Mk II after I returned it to some kind of electronic sanity. Sorry they're a bit shaky, it's been a lo-o-ong day. 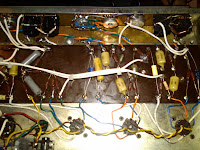 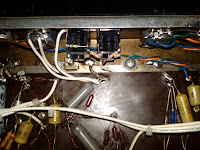 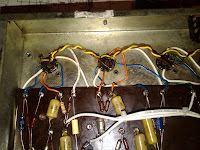 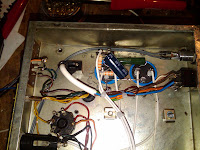 Oh dear a bit of a lashup

My goodness what a dreadful mess met my astonished eyes inside this Selmer Treble'n Bass MkII. Click on the images to see the full horror of it. Funny thing is, it actually worked, kind of. Anyone want to own up? 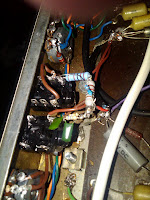 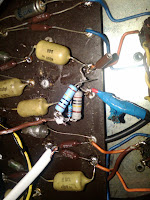 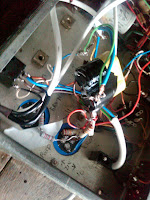 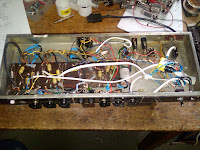 But take us the Voxes, the little Voxes, that spoil the vines

A couple of thing occurred to me after thinking about EBEEP's comment on my Voxiness post. Just two bits of random stuff.
First, about the AC15/AC10. There is a weak spot on these old amps. The EZ81 rectifier valve runs a 6.3v filament, giving cheapskate manufacturers the chance to run it off the same filament supply as all the other valves, rather than having an extra 5v supply as required by most rectifiers. However there is a good reason why rectifier valves should have separate filament supplies - they do have a tendency to short the high-voltage supply to the filaments, and if they're not on a separate supply this can cause damage throughout the amp (I have seen two examples of this, lovely old power transformers burned out, ugh). So if you have one of these old amps, get a really good unused EZ81 and fit it. Most of the early 60s AC10/AC15s I see still have the original Mullard, but even Mullards aren't immortal. Best replacement is of course... an NOS Mullard.
And in an unconnected development... The outstanding good point of an AC10/AC15 is that it gives you Vox power amp overdrive at lower volume levels. A neat and kind-of-fairly non-invasive mod for an old AC30 is to separate the four EL84 outputs into two pairs, each on its own cathode resistor, and make one pair liftable from earth, giving you a switchable AC15 output stage in your AC30. Bigger output transformer and bigger speakers than an AC15, sure, but in a stage situation it is for many people just what they need to get their optimum sound without drowning out the band, and it does sound good (...or get an attenuator. The Weber MASS is the best I've heard).
Posted by Steve at 8:22 AM No comments:

PS sorry to be slow in responding recently.
Stuff happened.
Posted by Steve at 1:56 PM No comments:

Past Posts Are All Here: click the little arrow pointing at the month to see that month's posts